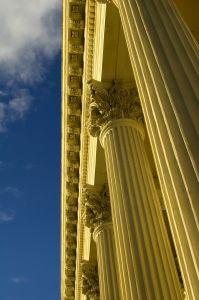 Our New Jersey attorneys appear in municipal court throughout the state of New Jersey to represent people who have been charged with motor vehicle offenses, driving under the influence, violations of local ordinances and petty criminal offenses. We operate under the belief that in a free and democratic society, the citizen's best friend is the humane, sincere and aggressive attorney.

Every municipality in New Jersey, from the largest to the smallest, has its own municipal court (or in the case of some small towns, a municipal court shared by several). Most people become involved with the legal system through being required to appear in municipal court.

New Jersey’s municipal court judges have the full authority to enter penalties up to the limit of the law, including jail, fines, probation, and license suspensions. Often, penalties have more serious consequences than they appear. For example, even if a driver’s license is not suspended by the judge, the motor vehicle points which come with many motor vehicle offenses may cause her license to be suspended anyway. Likewise, while it might seem easiest to simply plead guilty to a criminal offense which will not lead to jail time, and simply pay a fine and move on, in fact this can leave a person with a criminal record which can make it harder to find or keep a job, cause stiffer penalties for future charges, hinder college acceptance, prevent enlisting in the military, obtain a firearm license, obtain a license to be a professional such as a lawyer, hold public office, and many other adverse consequences.

New Jersey’s municipal courts hear traffic violations, from speeding to drunk driving. Even when there is no suspension, a guilty plea or verdict will often impose motor vehicle points, which can lead to suspension. New Jersey’s municipal courts also handle criminal matters known as disorderly persons offenses (called misdemeanors in some other states). These are criminal offenses where the penalties do not exceed six months in jail. New Jersey’s municipal courts also handle violations of municipal ordinances, such as zoning, health and rent control regulations. Municipal ordinances cover a wide range of areas affecting day-to-day life and business for all of us. Although New Jersey municipal court cases are heard by a judge, not a jury, the full range of defenses are a available to defendants in municipal court, including motions to suppress evidence, motions to bar witnesses, motions to disqualify breathalyzer results, cross-examination of witnesses, lack of jurisdiction, double jeopardy, unconstitutionality, denial of a speedy trial, discovery violations, defective summonses, and other “technicalities.” Likewise, “plea bargaining” is allowed, and it is often possible to negotiate for a lesser offense or sentence even in the face of evidence.

Contact us by e-mail or call (973) 890-0004. We are experienced at helping those charged with crimes, traffic offenses or municipal code violations in New Jersey municipal court.