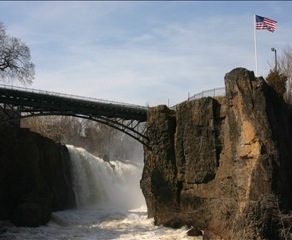 Passaic County, New Jersey has one of the richest histories in New Jersey, and, indeed, the United States, and McLaughlin & Nardi's attorneys have a rich history in it.

Paterson, the Passaic County seat, was founded by Alexander Hamilton at the site of a Dutch settlement to harness the power of the Great Falls of the Passaic River to form America's first planned industrial city. Paterson was known as the "Silk City," having more than one hundred silk mills at its peak. John Holland, who built the first submarine for the Union Navy during the Civil War, lived and worked here, and taught Maurice McLaughlin's great grandfather math in grammar school. During both World Wars, Passaic County built the equipment which our troops used to keep the world safe for democracy. Waves of immigrants from every continent and many emigrants during the Great Migration from the American South came to make a new and better life in the plants and mills of Paterson, Passaic and Clifton. Paterson figures richly in the country's labor history, and was the birthplace of many labor unions. It is also central in the country's literary life, being the home of Allen Ginsberg. The poet William Carlos Williams wrote his opus magnum about it, Paterson.

Passaic County is still richly diverse. It stretches from an urban core of Paterson and Passaic, to working class neighborhoods in Clifton and Haledon, to the suburbs of Wayne and Butler, and the rural areas of West Milford. People from all over New Jersey, the United States and the world still come to Passaic County to make a new and better life. Passaic County is economically diverse as well. It boasts an incredible range of businesses, from large multi-national corporations, to small businesses, to farms that have been in the same families for generations.

It is no accident that our attorneys chose to locate in Passaic County. Frank Nardi's father founded an accounting practice in Paterson, Totowa and Little Falls, after returning from Army service during the Vietnam War. Maurice McLaughlin's great, great grandfather John McBride became a sergeant in the Paterson Police Department after immigrating from Northern Ireland, and wrestled the gun out of the hand of the murderer during the famous Garret Mountain Riot of 1880. His son, Andrew McBride, was a captain and acting chief of the Paterson Police Department during the famous six month Silk Strike in 1913. Maurice's grandfather, Bill McBride, had a forty year career as a reporter, war correspondent, and then managing editor for the Passaic Herald News, and was author of "Anybody Here From Jersey?" a compilation of dispatches for the Herald News from the Mediterranean Theatre during the Second World War, and a history of the early newspapermen of Paterson and Passaic.

Likewise, McLaughlin & Nardi's diverse practice matches the diversity of Passaic County. The firm's attorneys represent businesses of every size and purpose, from formation to dissolution, in friendly and acrimonious transactions, employment disputes and commercial litigation. Our attorneys represent the people of Passaic County in ways as diverse as its people themselves. Our first goal for people, as for businesses, is to help them plan so that they can avoid problems; we represent them in buying and selling real estate, estate planning and administration, landlord/tenant issues, negotiating employment contracts and severance agreements, tax planning, insurance issues, and in matters before governmental bodies, and condominium and homeowners associations.

However, not every problem can be solved through friendly negotiations or mutual agreement. Therefore, we represent Passaic County's people and businesses in employment disputes, both as employers and employees. We represent Passaic County's residents in personal injury lawsuits, property disputes, probate and estate litigation, tax appeals, review of governmental action, and in local municipal and criminal courts.

To learn more about the legal services our attorneys provide in Passaic County, and for its residents and businesses, please visit our website or contact one of our lawyers at (973) 890-0004. You may also contact us by e-mail at info@esqnj.com.