Please note that, in light of Governor Murphy's recent "stay at home" order in New Jersey due to the COVID-19 pandemic, McLaughlin & Nardi, LLC's attorneys and staff are working remotely at this time. However, we are still ready, willing, and able to address all of your individual and business legal needs. Please contact us by phone at (973) 890-0004 or email at info@esqnj.com. We are committed to providing the same high level of legal services that our clients have come to expect over the years. Thank you. 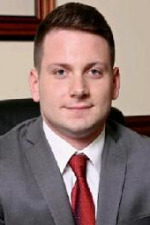 Robert Chewning is an associate at McLaughlin & Nardi, LLC. He practices primarily in the areas of complex commercial, contractual, employment, civil litigation and bankruptcy issues. Robert’s dedication, passion, and determination has helped his clients, both individuals and businesses, in achieving their goals, both quickly and efficiently.

Robert joined the firm during his second year of law school and stayed with us since he graduated. Robert has handled all aspects of research to arbitrations and trials, including retaliation and whistleblower protections under the Conscientious Employee Protection Act, New Jersey’s Law Against Discrimination, disability harassment, and employee-independent contractor determinations under the Fair Labor Standards Act and New Jersey’s Wage and Hour Law. He has drafted briefs on employment related issues for many cases, including appeals to both the New Jersey Appellate Division, New Jersey Supreme Court, and the United States Court of Appeals for the Third Circuit.

Robert is admitted to the bars of New Jersey and New York.

Prior to McLaughlin & Nardi, Robert worked at the Superior Court of New Jersey in Hudson County as a judicial intern for the Honorable Marybeth Rogers in both the Family Division and Special Civil Part. He worked alongside the judge in drafting and reviewing the judge’s orders and opinions and assisted mediators in court appointed mediation. He also worked on landlord/tenant law and mediation.

Robert received his juris doctorate from Rutgers School of Law – Newark. At law school, Robert was a student attorney for the Rutgers Federal Tax Law Clinic, gaining valuable experience and knowledge in the field of tax law. As a student attorney, he represented low-income taxpayers on multiple tax law issues, including eligibility of earned income credit, availability of innocent spouse relief, and trust fund recovery penalties. He was responsible for every aspect of his client’s case including counseling, legal research and briefing, negotiating with the IRS, and appearing for Tax Court trials. For instance, Robert successfully appealed and negotiated with the IRS to relieve his client of past due tax liability based upon the defense of innocent spouse relief.