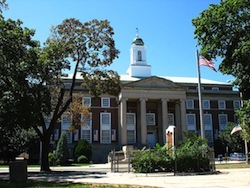 Union County, centrally located in the heart of New Jersey, includes the urban areas of Elizabeth, industrial towns of Linden and Rahway, the older towns of Mountainside, Scotch Plains, Clark and Westfield, and the newly developing suburbs of Berkeley Heights.

It is marked by small, close-knit communities, densely populated cities, and everything in between. It has one of the busiest marine ports in the world (the Port Newark-Elizabeth Marine Terminal), an international airport (Liberty International Airport – straddling Newark and Elizabeth), and colleges such as Kean University and Union County College. A broad range of legal issues arise in this melting pot. Our attorneys have been helping people and businesses with these issues for years.

Union County was the last county to be formed in New Jersey, yet it was actually the site of the first English settlement in the state. Union County was originally part of Essex County. However, Essex County’s expansion and increasing population prompted its secession. Union County has a population of more than half a million people. Not only is it a densely populated area, a 2009 study by Forbes determined that Union County residents suffer from the second-highest property taxes of all counties in the nation, just below Passaic County. McLaughlin & Nardi’s attorneys frequently handle New Jersey property tax appeals.

Many prominent people have called Union County home such as the economist Milton Friedman, the scientist Carl Sagan, the actress Meryl Streep, and the actor Ray Liotta.

More serious criminal matters and civil cases are handled in the Superior Court of New Jersey at the Union County Courthouse in Elizabeth. McLaughlin & Nardi’s attorneys frequently appear in Union County’s Courts and can help you to navigate this system to protect and advance your legal rights.

The County is governed by a nine-member Board of Chosen Freeholders. A Freeholder is an elected, part-time legislator. The Board sets policies for the operation of the County. The Freeholders formulate and adopt a budget, set county policies and procedures, and oversee county spending and functioning.

To learn more about the legal services we provide in Union County, and for its residents and businesses, please contact one of our lawyers at (973) 890-0004 or by e-mail at info@esqnj.com.