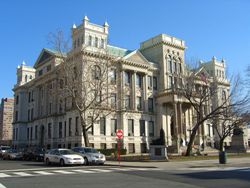 McLaughlin & Nardi’s employment attorneys have been fighting for New Jersey employees’ civil rights for many years.  Our employment lawyers have made a commitment to helping public employees gain redress from the government’s violation of their civil rights.

Both New Jersey and federal law prohibit governments from taking actions that deprive people – including their employees – of their constitutional rights.  Our attorneys make aggressive use of both the New Jersey Civil Rights Act and Section 1983 of the federal Civil Rights Act to vindicate the rights of employees which have been violated by their government employers.

The original law allowing public employees to sue their government employer is the federal law known as “Section 1983.”

Shortly after the Civil War, during Reconstruction, Congress passed a series of laws to protect the rights of freed slaves, culminating in the Fourteenth Amendment in 1868, providing that citizenship, due process and equal protection to all people.  However, the Fourteenth Amendment had no enforcement provisions. President Grant urged Congress to pass a civil rights enforcement law in response to rampant violence, often with the collusion of local government officials, aimed at freedmen and southerners who supported the Union during the Civil War.  In response, Congress enacted the Civil Rights Act of 1871, also known as the “Ku Kux Klan Act” since one of the evils it addressed was the acts of the Klan.  This law lives on in 42 U.S.C. § 1983, or “Section 1983.”

In short, Section 1983 allows people to file a lawsuit against those who use the law to deprive others of their rights under the United States Constitution or federal laws. Simply put, the government and government officials cannot abuse their power to deprive people of their rights.

Suits under Section 1983 can be brought in New Jersey Superior Court or federal court, although defendants can remove suits from state court to federal court.  Employees have the right to a trial by jury.  Successful employees can recover compensatory damages, such as lost pay and emotional distress, and sometimes punitive damages.  Successful employees may also have their litigation costs and attorneys fees paid for by the defendants.  People and governmental entities who violate these rights can be sued, although the state government and its employees are immune from suit under Section 1983 because of the Eleventh Amendment.

Our attorneys have successfully litigated Section 1983 suits in New Jersey’s federal and state courts.  We are committed to fighting for employees’ civil rights.

The New Jersey Civil Rights Act prohibits any person or entity from depriving employees of the protections of the state and federal constitutions and laws.  All of a person’s constitutional rights are protected, including due process, equal protection, and free speech.

The Act protects government employees, as well as citizens at large.  If their rights are violated, they can bring suit in New Jersey’s Superior Court.  Employees are entitled to have their civil rights suits decided by a jury of their peers.  If an employee wins, in addition to compensatory damages, such as lost pay and emotional distress, she may also recover her attorneys fees and litigation costs, and possibly punitive damages.

Our employment attorneys make aggressive use of the protections of the New Jersey Civil Rights Act in fighting for employees’ rights.