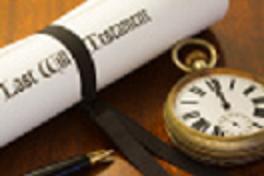 McLaughlin & Nardi’s estate planning attorneys assist people in drafting wills to ensure that their wishes are carried out after they are gone.

Ideally, a will would be in place to convey the person’s wishes before the person died.  Wills need to be in writing, signed by or at the direction of the one making the will, and signed by two others who witnessed the signing.  Otherwise, courts look for clear and convincing evidence of intent for other documents purporting to be, amend, revoke, add to, or revive a will.  Above all, when contested, courts try to uphold the intent of the person who made the will, looking at the whole will and considering surrounding facts and circumstances.  For example, courts have been known to interpret a will in light of changes in tax laws if it is clear that the goal of the person making the will was to minimize payment of taxes out of the estate.

If a court is unable to discern the likely intent of the person drafting the will from its wording, considering surrounding facts and circumstances, the court will assume common impulses and intentions that would ordinarily be present, such as to provide for immediate family.  Additionally, the court will use generally understood rules of construction such as interpreting the same words the same way throughout the will and trying to give meaning to every word in the will.  Courts will alter their approach depending on whether a lawyer or a lay person wrote the will.

However, the court will consider intent only when applying an actual will.  It will not let revealed intent become the creation of a will if someone failed to execute one.  Historically, when in doubt, courts construe a will to avoid disinheriting an heir or next of kin.  Courts today expect people to provide for a spouse or anyone he or she wants to benefit in the vehicle of a will.

This is a simplified summary, but the rules can be quite complicated and difficult to apply.  Drafting a will to adequately convey a person’s wishes, and often interpreting a will when disputes arise, require legal skill, and obtaining legal help is imperative.  The experienced New Jersey estate planning attorneys at McLaughlin & Nardi, LLC, can help with all aspects of estate planning, considering tax implications, to help you provide for your loved ones. E-mail us or call (973) 890-0004 for estate planning assistance.